Welcome to the Company D Library

Below you will find an extensive collection of print and media works to improve your knowledge of sharpshooters and your military impression.

Editor's note:  Our unit takes great pride and effort in our research and providing our findings and, whenever possible the original documents, to the public free of charge.  All we ask if you repost or use our research for your own work to please take the time to attribute our website, our authors, or the sources of our documentation.  Enjoy!

About a year ago, I was doing my normal “bored” routine of poking around on the internet, trying to find something interesting. I tried the search “2nd USSS D Co;” a rather common one for me. About halfway down the second page, there was a result from MEGenWeb, a genealogy web site that is affiliated with the USGenWeb Project, a collection of free genealogy information that was founded back in the dark ages of the internet in 1996.
What did I find, exactly? I found a list of names. I found a word-for-word transcription of a document entitled Annual Report of the Adjutant General of the State of Maine for the year ending December 31, 1863. Click here for the link. This document contains the name, rank, age, marital status, place of residence, and general remarks on every single soldier who was part of the 2nd United States Sharpshooters, D Company at any time between January 1 1863 and December 31 1863. This is an amazing find! Some of this information isn’t in our own records that we have on this very website! Some of it actually conflicts with what we already have! Further review exposes a little problem. Scrolling to the bottom of the page, there are some 40-odd names with little comment other than “Discharged and Deceased in 1862 – Final record given in last report.” Last report? Where? I searched all over MEGenWeb. Nothing. No Annual Report of the Adjutant General of the State of Maine for the year ending December 31, 1862.
Something changed, though. I moved to Moscow to go to school at the University of Idaho. I’ve learned that attending a university has its benefits in relation to research. I can get almost any document from anywhere including things that have no bearing on my major or my own “scholarly research.”  I knew that the Report for 1862 was out there somewhere. One day, I sat down with my laptop in the same little university library café that I am sitting in right now and plugged the exact title that I wanted to find, Annual Report of the Adjutant General of the State of Maine for the year ending December 31, 1862, into WorldCat, an international library catalog. There was a University of Idaho button and I clicked it. It took me to a page that had three important things on it. First was a bit of text that said “Annual Report of the Adjutant General of the State of Maine for the year ending December 31, 1862.” Second was a map that showed the Commonwealth Library in Harrisburg, Pennsylvania. Finally, a button that said “request.”
Three weeks later, I got an email from the U of I Office of Inter-Library Loan. I walked to school on a Saturday morning, and a lady at the circulation desk handed me a four-inch-thick manila envelope and showed me to the Microfiche Reading Room. Now, some of the readers younger than the First Sergeant and Private Bamonte probably won’t know what a microfiche is. It is a fancy word for a really small film negative of a document. I sat down in front of what looks like a medieval torture device strapped on to an even older computer. I’m talking about a 1990s ThinkCentre with 1 GB of hard drive, 556 MB of RAM, and a beige-colored vacuum tube screen.
It was tough, but I did it. I sorted through the 600-and-something page document and found the following: A two paragraph report prepared for the Governor of Maine, the Roster of Commissioned Officers (on which our company appears four times), two tables with various data of interest, and the holy grail that I was looking for. The full roster of the company, just like the one that I had found before, but for the previous year. It is, in effect, a record of everything that Company D went through in their first year of service. It contains wonderful little details, like the Morning Report from the day the roster was sent back to Augusta, the organization of the officers and NCOs, and the tidbit that Captain McClure was sick in bed on the morning of November 2, 1862. The dreaded “Discharged in 1861” is still present, but only for one man: Andrew Newall. It is a lot easier to find information on one man than it is 40, so I consider this to be an acceptable amount of omission.
So here it is: Annual Report of the Adjutant General of the State of Maine for the year ending December 31, 1862, along with my best efforts at a transcription of the roster. Some of the numbers were difficult to read given the nature of typewriters and microfiche, but I have reproduced it exactly and to the best of my ability. Enjoy. 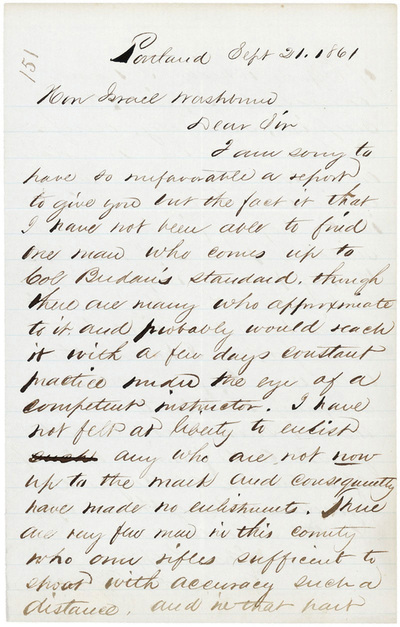 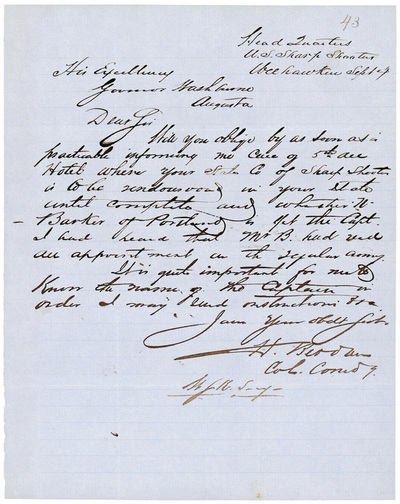